For the past several years Orchard, the digital marketplace that connects institutional money with online lenders, has predicted the outcome of the Super Bowl. The Fintech firm uses lending data as the basis for their predictions – specifically Loan Volume, Borrower Characteristics, Vintage Characteristics, and Loan Performance of borrowers in their respective media markets. In this years analysis, Orchard compares the two metropolitan markets using Lending Club loans originated from 2010 through September 2017.

So how accurate has Orchard been in the past few years. Well, pretty good if you don’t count 2017 when the Patriots delivered one of the most incredible comebacks in Super Bowl history as the Atlanta Falcons somehow managed to squander a 28 – 3 lead. You gotta wonder. So can Orchard redeem itself this year? Can online lending data be used to accurately predict the outcome of a Super Bowl? We will know soon enough.

So below is a synapsis of team Orchards expectations for this years Champion of Super Bowl LII: The Philadelphia Eagles vs. the New England Patriots. 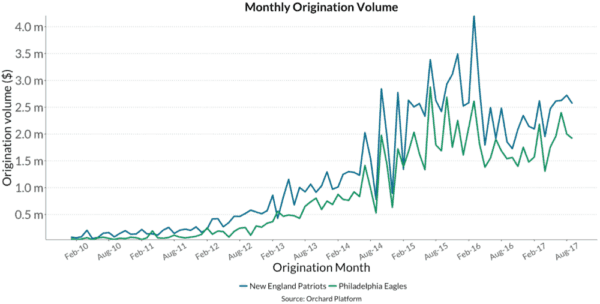 As we see from the data points, although the ratio of loans originated in Greater Boston to Greater Philadelphia has neared closer to 1 each year since 2010, the Patriots maintain the edge here originating 1.32x Eagles originations.

n 2017, borrowers from Greater Boston had better overall borrower characteristics than that of the Greater Philadelphia area. We see that with the exception of Annual Income (by a slight margin), the Patriots have more favorable stats in each of the categories listed. Higher FICO, lower Average Interest Rate, lower Average Debt-to-income, and a lower Revolving Credit Utilization.

A significantly larger percentage of borrowers in the Greater Philadelphia area own their home (the majority having mortgages) as compared to the Greater Boston area where we find most borrowers are renters.

Borrowers in both Greater Philadelphia and Greater Boston had similar sized loans, with Philadelphians borrowing $729 more dollars on average. Interest rates for those loans in Philadelphia were slightly higher as well (18 bps), while the distribution of terms and types were fairly consistent, as were the loan purposes.

For performance, we have isolated Monthly Return, Cumulative Return, Charge-Off Rate, and Recovery Rate. As seen in the graphic below the shape of the trends we are analyzing for performance are relatively similar between the two teams.

However, as we delve deeper into the figures, we see that the Patriots, due to a lower charge-off rate, have a more favorable return profile.

So it looks like Tom Brady and the New England Patriots have the edge!

Who is Going to Win the Super Bowl? Orchard Predicts the Winner Between the Patriots & Eagles